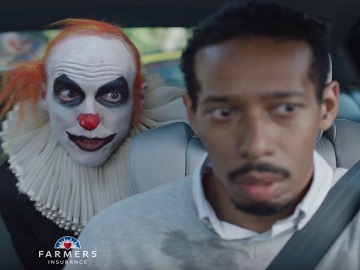 Farmers Insurance has released a new ad, illustrating another claim that Farmers has covered.

The spot, dubbed “Three-Ring Fender Bender,” opens, as all the others, with Prof. Burke – played by Academy Award-winning actor J.K Simmons – walking through the Hall of Claims together with a customer, telling her “At Farmers, we’ve seen almost everything, so we know how to cover almost anything. Even a ‘Three-Ring Fender Bender'”. The ad then continues with a rendition of an event occurred on June 21, 2018, when a man had his car hit by a car full of contrite clowns. They got out of their colorful vehicle to apologize, but ended up terrifying him with their intruding behavior.

The commercial ends with Burke saying, while looking with the customer at a small version of a car full of clowns “Quite the circus. But we covered it. At Farmers, we know a thing or two because we’ve seen a thing or two”.

Previous: IKEA People Falling Asleep Commercial – We Can Save Our Sleep
Next: Farmers Insurance Hall of Claims Rock and Wreck Commercial