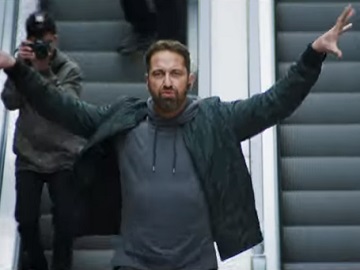 Gerard Butler is the star of the newest ad campaign launched by Enterprise Rent-A-Car UK.

The Hollywood A-Lister is featured in two actions-packed spots aimed at highlighting that Enterprise provides the perfect solution for any mission, however extreme it gets.

One of the adverts, entitled “Paparazzi,” follows Butler as he runs through the streets of London trying to escape a group of paparazzi. On his way, he calls Enterprise, saying he needs wheels. After several stunts, including jumping off a bridge, landing on a pile of boxes filled with fish, and running through wooden doors, he gets to the Enterprise car that he attempts to open by smashing a window with his elbow. Informed by the Enterprise agent that he can unlock it with his phone, Butler proceeds to do so and manages thus to evade the paparazzi ambush.

At the end of the advert, the voiceover highlights that you can “choose from more vehicles, at more UK locations than anyone else,” and adds the tagline “Whatever the mission – Enterprise”.

Created by agency The Corner, the campaign had stunt coordinator Greg Powell, whose experience includes work on movies like Bond, The Avengers and Bourne, getting involved for the filming of the blockbuster-styled ads.

The Paparazzi ad will air from 22nd April 2019 and will also run in UK cinemas nationwide.