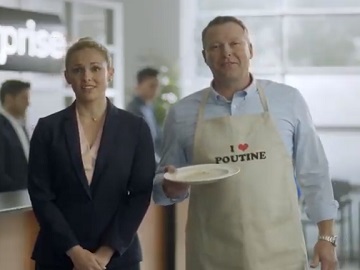 Enterprise has released a new commercial featuring NHL legend Martin Brodeur. This time, he explains a delicious analogy the company makes to emphasize the variety of its services.

The spot features an Enterprise spokeswoman introducing Brodeur and Brodeur introducing a dish called Poutine, which is not disco fries, not gravy and fries, but “an incredible combination of French fries, gravy and cheese curds, all in one place.” “Sort of like Enterprise is an incredible combination of vehicles you can rent, buy or share, all from one place,” the young woman says, whilst Brodeur is finishing the poutine from the plate, leaving it completely empty.

“It’s an analogy,” the girl adds, but noticing the empty plate she rectifies, saying it “was an analogy”.
At the beginning of this year, the transportation provider launched a TV commercial starring the Hall of Fame goalie, showing people how he gets picked up by Enterprise. The ad features Brodeur renting a car for his pee wee team, a truck for his hockey equipment, a convertible to ride in style, sharing an SUV to commute to work and buying a quality used car.

“Plus, Enterprise treats him like a Hall of Famer, which I am,” he also says on the 30-second commercial, encouraging viewers to rent, buy or share, and adding the company’s tagline, “How can Enterprise pick you up today?”.

Brodeur has thus joined the likes of Kristen Bell and Joel McHale, who have also starred in multiple campaigns for Enterprise, showcasing its multiple transportation offerings, including car, truck, and luxury vehicle rental as well as carsharing and car sales.