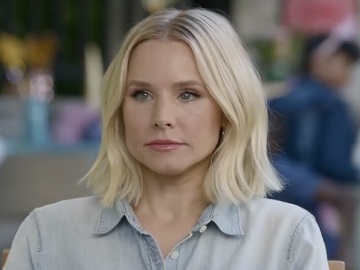 From birthday parties, to bake sales to everything in between, Enterprise is the one place to go for every place life takes you,” this is the idea behind the latest Enterprise commercial, starring Kristen Bell.

The spot aims to shows that, when Kristen Bell is in a bind, it’s Enterprise to the rescue, and features the charismatic actress in several situations in which Enterprise comes to help her out. First, she is seen tied to a chair at a birthday party asking for a car to take her anywhere because the kids keep calling her “mommy pinata”. Then she has Enterprise helping her out with a truck to transport ten dozens of baker’s dozens at a bake sale, and with a family car big enough to carry tents, footballs, and more because her current ride, a motorcycle, “isn’t gonna cut it”.

“Rent. Buy. Share. How can Enterprise can pick you up today?” the voiceover says at the end of the commercial.

Kristen Bell, who has been a brand ambassador for Enterprise for several years now, has also starred in ad campaigns for other brands, too, including Lightlife, for which she and Dax Shepard promote the plant-based burgers, Houzz, Neutrogena, Samsung and La-Z-Boys.

Previous: Peloton Christmas Commercial Song – Give the Gift of Peloton
Next: Virgin Trains Advert Song: Final Whistle From 1997 to 2019