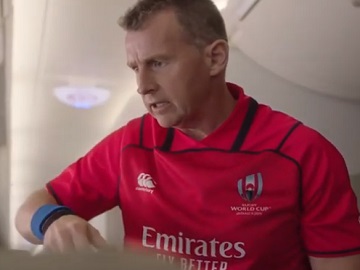 Owens stars in a series of short, light-hearted and witty videos, part of the airline’s “Emirates etiquette guide to Rugby World Cup 2019” campaign, that aim to blow the whistle on bad traveler etiquette during flights. In the first video, the famous referee literally blows the whistle during a flight to wake up an Irish rugby fan who fell asleep on his neighbor’s shoulder. “Roll away, green, roll away, get back on your own side,” Owens tells the sleepy passenger and then runs away.

Emirates, an Official Worldwide Partner of Rugby World Cup 2019 (RWC 2019), will screen, on its aircrafts equipped with Live TV, the competition’s matches live on dedicated in-flight sports channel Sport 24, available on the airline’s award-winning ice entertainment system. Moreover, through its Flag Bearers programme, Emirates offers to a number of young rugby fans the opportunity to lead participating teams and carry their country flag onto the field.

Owens, one of four professional referees at the Welsh Rugby Union, alongside Ben Whitehouse, Craig Evans and Dan Jones and the current world record holder for most test matches refereed, also stars in a new advert for the Citroen C5 Aircross SUV. Titled “Adventure just got civilised,” the spot features the referee helping a bear to become a civilised creature, with a nice “haircut,” with manners and musical skills (he teaches him how to play the double bass).