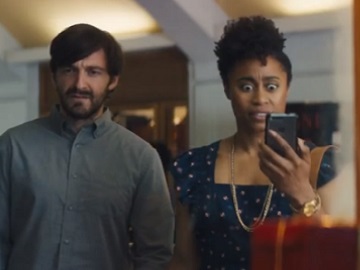 eBay takes a jab at those having early holiday sales in a series of new ads, titled “Too-early holiday moments,” highlighting that on eBay you can get deal every day, not just holidays.

One of the commercials features a couple stopping in front of a store window adorned with a Christmas tree and several gift boxes, where a red sign announcing a “Really Really Really Early Holiday Sale” tries to bring in customers. Shocked to see that sign, the woman takes out her phone to look at the calendar, which reminds her it’s September 16.

The commercial, set to the tune of “Deck The Halls” by Carol Singers, concludes with the tagline “Outsmart holiday creep. Get deals every day. Not just the holidays”.

The e-commerce company took the commitment to avoid holiday chatter until the holiday season is actually here and encourages people to enjoy fall.