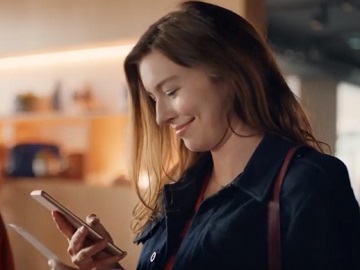 eBay has released a hilarious new commercial, that illustrates people’s reaction when they know they are asked to overpay.

The 30-second ad depicts various situations in which customers take a look at the price tag and burst into laughter as they check eBay and realize they could buy those items at much better prices. Thus, a woman in a clothing store sees a blouse priced at $125 and can’t help laugh seeing that the same blouse costs $54.99. A guy and his friends in a guitar shop, a couple that test a $2000 sofa, a man in a pet food store, a father and his daughter shopping for a bike, they all have the same reaction – burst into laughter seeing the price tag in store.

“When you’re over overpaying, get it on eBay,” the voiceover says at the end of the commercial.

The e-commerce company advises people to check eBay before they pay too much for that thing they love, and get exactly what they want for a price that works for them.

eBay has also released a series called “Seller Story,” featuring entrepreneurs and eBay sellers talking about their businesses and more. Mary Jane Mark, owner of Mack Cycle & Fitness bike shop, which is multi-generational family business run by women, in Miami, talks about what it takes to make it in today’s competitive marketplace, Cori Thackery, owner of Sweetlees Boutique talks about how she manages being an entrepreneur and a mother, all while helping women look and feel their best, and Oren Charisky, one of the brains behind La Jolla Jewelry in West Hollywood, talks about what makes their jewelry and watch business tick and why Rolexes always win.