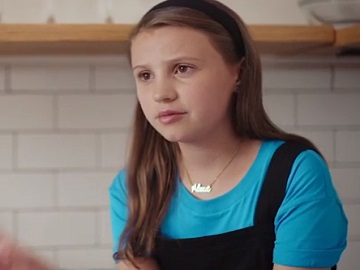 The e-commerce website has released a hilarious new commercial, entitled “Honest Alexa,” featuring a father and his teenage daughter, Alexa, having a conversation in their kitchen about Prime Day. Actually, the father is the one asking questions about this day and the girl is the one providing the answers. “Alexa, what is Prime Day?” the man is heard asking while making a peanut butter sandwich. It soon turns out he’s not asking Amazon’s voice-enabled smart assistant, but his daughter, who’s sitting on the counter, her phone in her hands. She says “Prime Day is a holiday Amazon totally made up to get people excited about their “parade” of deals,” adding for herself “At least real parades don’t charge a membership fee” (a nod to the fact that Amazon’s deals are available exclusively for Prime members). Asked about the sort of deals Amazon will have, Alexa declares “they’ll mostly have deals on a bunch of random stuff nobody really wants” because “they’re probably just trying to clear room in their warehouse.” At this point, her dad can’t help but ask if there’s anything good about Prime Day, which makes the teenager bring into the discussion eBay. “Yeah, did you check eBay?” she asks him, mentioning that they’re having a Crash Sale with deals on things people actually want, like smartphones, gaming systems, and shoes. She also takes the opportunity to suggest to her dad that he could do better in terms of shoes. The girl also explains what the event is called Crash Sale: “Last year, Amazon’s site went down – on Prime Day,” she says, adding “So, this year, when – I mean, if – Amazon crashes, I heard eBay is gonna unlock even more great deals”.

“Alexa, how do you know all this?” her father asks, making Alexa reveal she’s always listening.

“Shop the Crash Sale. Starting July 15th,” onscreen lines read at the end of the commercial, that carries the #CrashingPrimeDay hashtag.