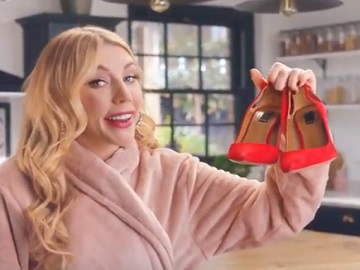 eBay advertises its services in the UK in a new advert, starring Canadian comedian, writer, presenter and actress Katherine Ryan.

The 30-second spot features Katherine snapping a photo of some red heels, which have been great for a night out, but are now going to a new home. After announcing that she’s selling them on eBay, she welcomes into the kitchen her tiny dogs. “Friends tell me I can make plenty of money on eBay, so I can get extra. Now my afternoon cup of tea can get a bit fancy,” the comedian also says, while on screen images of her shiny cup of tea, accompanied by trays filled with macaroons and sprinkled donuts, as well as a huge pink cake featuring her pets, are shown. However, when one of her furry friends, Manny, shows up with a tiara on her head, Katherine can’t help but ask her if the tiara is not “a little much”.

The end of the advert sees the actress trying to find other things to sell and taking a photo of her ring. A line that reads “Making money. It’s happening on eBay.” flashes across the screen.