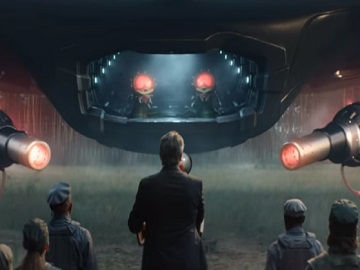 Duracell UK has launched a new advert, urging viewers to pick up the battery that lasts 100% longer.

The spot, dubbed “Bunny vs Aliens,” features the pink bunny showing up when an official who gives a speech in front of an alien ship and providing him with Duracell batteries. “Megaphone, you can’t quit now. These will keep you powering on until the predictable sequel,” the brand’s mascot says, leaving then the scene justifying that he can’t stay because he’s got gadgets to save.

The Duracell Ultra Type AA alkaline batteries have up to 100% more power for all devices, according to the brand, which specifies that the longevity performance was compared to the Minimum Average Duration of the 2015 IEC AA Digital Camera test.

The anthropomorphic pink rabbit powered by Duracell batteries debuted in North America in 1973, when the “Drumming Bunny” ad was launched. What was initially slated to be a one-shot character became a trademark.

Last year, Duracell partnered with Social Energy to launch new UK-based utility, whose business model includes solar PV panels, battery systems and an intelligent algorithm, which the firm names the Social Energy Network. The utility claims it can reduce the customers’ electricity bills by up to 70% and gain access to 100% renewable energy.