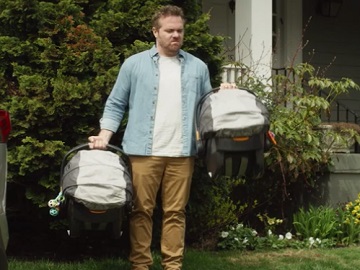 Dunkin’ advertises its Power Breakfast Sandwich as a protein-filled option you won’t be able to put down.

The 15-second ad released by the multinational quick service restaurant chain features the new menu item and a father who’s lifting alternatively the baby car seats of his babies, near the car. “It’s kind of like this, but with food,” the voiceover says, while on screen the man is seen explaining to a random jogger that it’s arm day.

At the end of the commercial, the voiceover urges viewers to power up with the Power Breakfast Sandwich and adds the chain’s tagline, “America runs on Dunkin'”.

Added to Dunkin’s menu earlier this year, in April, the Power Breakfast Sandwich features a veggie egg white omelet with spinach, peppers and onions, topped with turkey sausage and American cheese and served on a new, thin seeded multigrain sandwich bread. Made with eight whole grains (including whole wheat, quinoa, chia seeds, flax seeds, sunflower seeds, and pumpkin seeds), it has, according to the chain, 370 calories, 24g of protein, and no artificial flavors or dyes and no high fructose corn syrup.