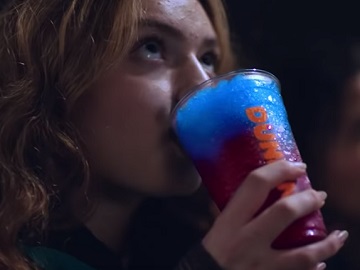 Dunkin’ is bringing back its Cosmic COOLATTA galactic frozen beverages and has released a new ad, as well, to spread the news.

The spot features a group of three friends each having a Cosmic COOLATTA and asking themselves, while looking at the night sky, if a Dunkin’ Cosmic COOLATTA is still called cosmic or it’s just a regular COOLATTA.

At the end, the voiceover urges viewers to “space out with a $2 small COOLATTA” and adds the brand’s tagline, “America runs on Dunkin'”.

The COOLATTA line-up includes the Cosmic Grape COOLATTA, featuring new Grape flavored COOLATTA topped with Blue Raspberry, the Cosmic Pineapple COOLATTA and the Cosmic Strawberry COOLATTA. For a limited time only, customers can enjoy any small-sized COOLATTA frozen beverage for $2. The offer is valid through May 28 at participating Dunkin’ restaurants nationwide.