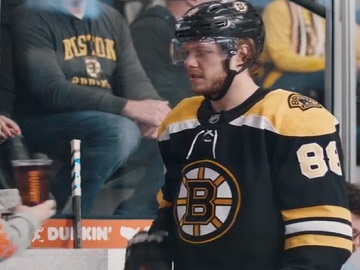 The Czech professional ice hockey right winger for the Boston Bruins of the National Hockey League (NHL) stars in a commercial titled “Penalty Box Short” as himself during a 2-minute break that he uses to have a Dunkin’ Cold Brew and tease an opponent.

“Where there’s hockey, there’s Dunkin,” the voiceover says at the end of the 15-second spot.

Cold brew is a brewing method where coffee grounds are steeped in cold water for 8-12 hours. The colder temperature brings out the rich, smooth flavor, without the bitterness or acidity. Dunkin’ Donuts also sells Cold Brew Coffee Packs, that are brewed fresh at home with ground coffee filters that steep in a pitcher of cold water for 8-12 hours, so that you could make cold brew coffee at home by following four easy steps.