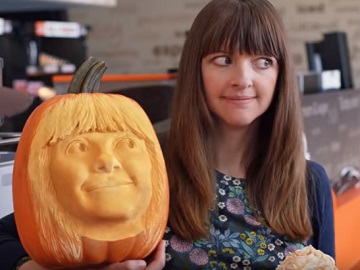 Dunkin’ invites you to treat yourself to a Cinnamon Sugar Pumpkin Signature latte in a hilarious new ad.

The 30-second spot, titled “Carver,” features a couple in a Dunkin’ store, with the woman telling her partner that his Cinnamon Sugar Pumpkin Latte looks amazing. “Yeah, with this caramel drizzle it’s so good,” the man says, which makes the woman reveal she wishes she was so creative. At this point, the Dunkin’ employee shows up, handing to the lady her Cinnamon Sugar Pumpkin Latte and saying she is not that creative. However, she soon puts on the counter a carved pumpkin featuring the respective woman’s face so well the customer is deeply impressed. Asked if she just carved it, the employee says she did, but when it comes to reveal the pumpkin she made for the man, she grabs a pumpkin carved as if it was for Halloween, justifying she had gotten busy.

The commercial ends with the voiceover urging viewers to treat themselves to a new Cinnamon Sugar Pumpkin Signature latte from Dunkin’ and adding the slogan “It’s all things pumpkin at Dunkin'”.

The Canton-based coffee chain also informs that an amazing hand-carved pumpkin sculpture of your face is not included.