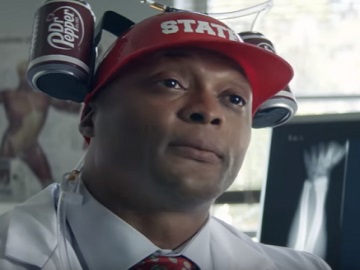 Dr Pepper has released the teaser trailer for the second season of Fansville, informing that it will be serving up “more delicious college football drama and more ice-cold Dr Pepper”.

“Next season on Fansville presented by Dr Pepper, more drama, more romance, more rivalry, more tailgates, and more Dr Pepper,” the voiceover says on the 30-second promo. Footage from the upcoming episodes feature a character informing that their top recruit just de-committed, the town’s doctor telling a patient that he’s got fumble fingers, a young woman telling a blue-eyed player he can have any tech girl he wants, and the sheriff (played by Brian Bosworth) drinking Dr Pepper even in the rain for a really dramatic shot.

At the end of the promo, which informs that season 2 of Fansville will debut next fall, the voiceover mentions, as always, that Dr Pepper is the official drink of Fansville.

Fansville, described as “a town where every day is Saturday and everyone is a fan, literally,” has been the setting for many stories in season one, which recently ended with a finale that featured the town’s sheriff catching the man who stole the National Championship Trophy.

Since 2014, the soda brand, a sponsor of the College Football Playoff, has relied on the concessions character Larry Culpepper, created by ad agency Deutsch in 2014 and played by actor Jim Connor, to carry its college football message. In May 2018, though, he was sidelined. After the news spread, a Dr Pepper spokeswoman praised the character’s work and informed that the brand’s football-related advertising will be taken in a new creative direction.