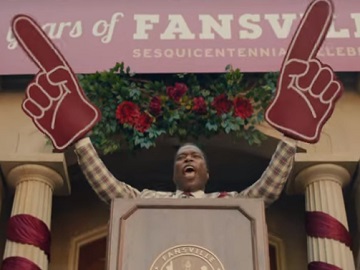 This fall, Dr Pepper’s Fansville returns for its second season, described as “the biggest season yet”, just in time for the 2019-2020 college football season. The beverage brand has released the trailer for the parody TV show drama, urging viewers to not miss the excitement, the action, and delicious Dr Pepper.

Created “to celebrate the commitment of Dr Pepper to both the sport of college football and the fan community,” (according to Derek Dabrowski, Vice President of Brand Marketing for Dr Pepper), Fansville takes place in the now famous college football town of the same name and sees cast favorites Brian Bosworth and Eddie George return in their roles as the town’s sheriff and doctor, respectively. Fans are promised adventures, plot twists and “another shocking finale that they won’t want to miss”.

“The second season of Fansville continues that tradition with more drama, more rivalry, and more fun, and by tapping into the nuances of what it really feels like to be a college football fan!” Dabrowski said in a press statement.

Fansville premiered on Monday, August 19th, with the first of its nine unique campaign spots. The “season finale” is set to air during the National Championship on January 13, 2020.