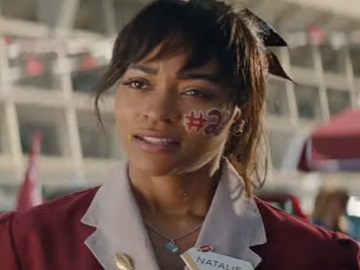 One of them, titled “Tailgate Cheating,” features a young woman returning to her boyfriend, who’s grilling some hamburgers. When the latter tells her she’s late, the girl explains she went to get more Dr. Pepper, and when he asks her if what he felt in the corner of her mouth, after kissing her, is Dijon moustard and if she’s seeing another grill, she initially denies it. However, when he realizes it might be the girl near him, he wants to know what she has and he doesn’t. “She has an onion volcano,” his girlfriend admits, hurting then his feelings by saying that for her the food tastes the same, even though he doesn’t use propane like his “competition,” but natural.

The episode ends, like the others, with the voiceover saying “Dr Pepper – The official drink of Fansville”.

“The second season of Fansville continues that tradition with more drama, more rivalry, and more fun, and by tapping into the nuances of what it really feels like to be a college football fan!” Derek Dabrowski, Vice President of Brand Marketing for Dr Pepper, said in a press release ahead of the season premiere, which took place on Monday August 19th.

The “season finale” will air during the National Championship on January 13, 2020.