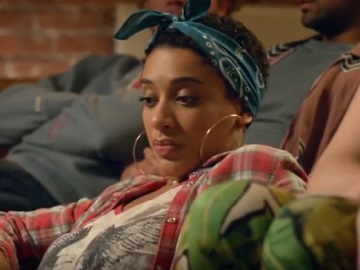 Domino’s Pizza continues its “The Official Food of Everything” campaign, from agency VCCP, with a new installment, that urges people to say ‘no’ to FOMO and try JOMO, The Joy Of Missing Out.

The spot, which presents Domino’s Pizza as “The Official Food of JOMO,” depicts various situations in which people are not having fun at all, even though the context would be a good opportunity for them to have, such as a dinner hosted by a boring lady, a play that turns out to be boring, a date where the guy doesn’t look at all like in the picture, a movie where everyone around are kissing, a sauna session that makes the protagonist feel uncomfortable, a party that is ruined by two girls who are doing karaoke, and a rock concert where one of the attendants doesn’t get to see anything because of two tall guys standing in front of him.

“Trust, you’re good. Right where you are. So say ‘no’ to FOMO and try JOMO, The Joy Of Missing Out,” the voiceover says at end of the advert.

First launched in 2017 and running across TV, digital, radio, Spotify, OOH, PR, and social, “The Official Food of Everything” campaign was brought back to the small screen, for its second year, in September 2018, with a spot that was the first of a new series of four TV spots. Released with the slogan “The Official Food of Never Again… Until Next Year,” the 30-second advert featured two parents in shock after assessing the damage caused to their apartment after their kid’s birthday party. Set to the tune of “The End Of The World,” the ad aims to present Domino’s Pizza as the perfect antidote for that situation. Other ads, aiming to illustrate the idea that a Domino’s pizza can improve a variety of situations, such as nights in with the family, 23rd wedding anniversaries, the nights you give the oven the night off, and when a girlfriend gets dumped by her boyfriend…again, also presented Domino’s as “The Official Food of the Night in Before the Night Out,” “The Official Food of Pretending To Understand The Rules Of Rugby In Front Of Your Father-In-Law,” and “The Official Food of Fighting for the Throne”.