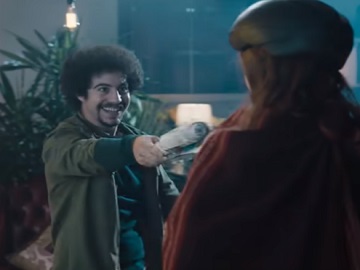 The 10-second ad features a group of friends playing a fight scene using bread and various kitchen utensils as their weapons, while another guy is sitting in an armchair and is eating a Domino’s Pizza.

First launched in 2017 and running across TV, digital, radio, Spotify, OOH, PR, and social, “The Official Food of Everything” campaign was brought back to the small screen, for its second year, in September 2018, with a spot that was the first of a new series of four TV spots. Released with the slogan “The Official Food of Never Again… Until Next Year,” the 30-second advert featured two parents in shock after assessing the damage caused to their apartment after their kid’s birthday party. Set to the tune of “The End Of The World,” the ad aims to present Domino’s Pizza as the perfect antidote for that situation. Other ads, aiming to illustrate the idea that a Domino’s pizza can improve a variety of situations, such as nights in with the family, 23rd wedding anniversaries, the nights you give the oven the night off, and when a girlfriend gets dumped by her boyfriend…again, also presented Domino’s as “The Official Food of the Night in Before the Night Out,” “The Official Food of Pretending To Understand The Rules Of Rugby In Front Of Your Father-In-Law,” and more.