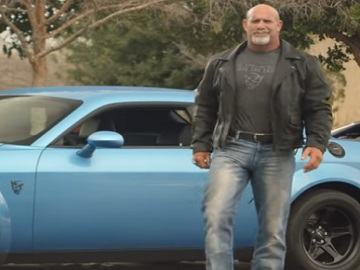 Dodge welcomes people to Muscleville, “the fastest place on Earth”. The automaker has released a new ad, that presents a Dodge owner’s paradise, where car culture is celebrated all day, every day.

“There’s a place where speed guns don’t exist and doughnuts are served fresh every morning. Welcome to Muscleville! A Dodge owner’s paradise. The only dating is speed dating. The Mayor is this guy (referring to professional wrestler and actor Bill Goldberg) and the town square is a straight away,” the voiceover says on the 30-second commercial, urging viewers to head to Muscleville, where every day is a performance day.

Goldberg is not the first celebrity to appear in a Dodge commercial. In 2017, the brand enlisted Fast and Furious star Vin Diesel to drive some of its most powerful cars, including the new Durango SRT and the 707-hp Challenger Hellcat, in a series of ads launched with the tagline “Brotherhood of Muscle”.