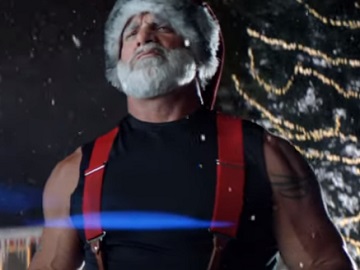 The spot, titled “Cul de Sac,” features Bill Goldberg dressed as Santa showing up in front of a man’s house at the wheel of a modified Dodge Challenger sleigh. He then opens his bag of presents and a red AWD muscle coupe Challenger, a red Durango, presented as the “most powerful SUV in its class,” and the new 2020 Charger Widebody appear drifting on the snow. “Dodge Power Dollars to all, and to all, outta my way!” Goldberg shouts before taking off at the wheel of his “sleigh”.

At the end of the commercial, the voiceover announces that Power Dollars are coming to town at the Dodge Black Friday Sales Event.

Goldberg is known for collaborating with Dodge. The pro wrestler and actor has starred in several other commercials for the automaker over the years and earlier this month he announced the first weekly “Dodge Horsepower Challenge” question.