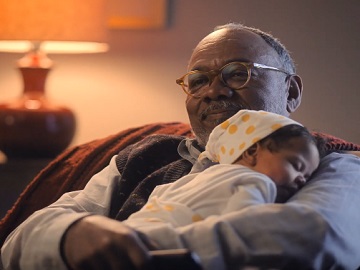 DISH advertises its new DISH Voice Remote with Google Assistant in a commercial that focuses on the situations in which people really need such a remote.

“I know people love the DISH remote. It’s great. So why build in a Google Assistant? I mean, who really needs a TV remote that can turn the thermostat up, the lights down, and still access their DVR? Actually, some people could absolutely use a remote like that,” a female voiceover says on the 30-second spot, which features a grandfather holding his grandchild in his arms and using the DISH remote to change the temperature on his Google Nest
Thermostat, to adjust lighting, and access his Hopper DVR.

The commercial ends with the voiceover introducing the new DISH Voice Remote and adding the brand’s tagline, “Tuned In To You”.

The media company rolled out the software update that added Google Assistant to its existing voice remotes and launched the Google-branded voice remote at the end of July. The update applies to the Dish Hopper family of receivers: the Hopper, the Joey and the Wally.