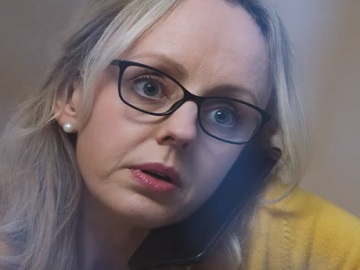 The spot released by the insurance company opens with a woman named Tracey, who discovers a leak causing damage in her living room and makes a phone call to have the problem fixed. While she waits anxiously on the line, Harvey Keitel, who is once again reprising his role as Winston Wolf from Pulp Fiction, shows up at her window and tells her he’s there to take her out for a walk. “But I’m not with Direct Line,” she says, which makes Wolf reply that this is the reason why she’s been waiting around for someone else to fix her problem instead of doing other things, that she missed out, such as having a drink with a friend, saving a cat from a tree and even competing on “Dancing On Ice”.

The end of the advert sees Tracey in the audience, with Wolf by her side, asking her to sign the doll a little girl hands to her for an autograph. After she signs it, Wolf disappears and, as people around start applauding Tracey on ice, the line “Get Your Life Back. Get Things Fixed Fast” flashes across the screen.

Created by Saatchi & Saatchi, the advert is complemented by a podcast hosted by Dancing on Ice and Loose Women star Saira Khan and life coach Stuart Holliday, who question celebrity guests about what stops them from achieving their goals.