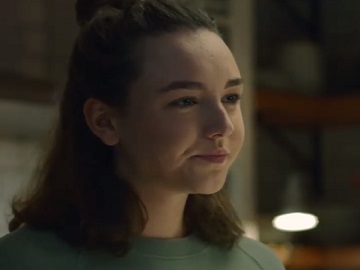 Dairy Farmers of Canada have launched a new campaign, titled “Milk. It’s in the stuff you love,” that highlights the presence of milk in foods that people enjoy every day.

The campaign, whose target is represented by Millennials and Gen-Z, aims to reposition milk for this group of consumers and inspire them to rethink their stance on dairy through ads inspired by movie and TV shows, including romantic comedies and cooking competitions, where a six-foot-tall glass of milk character interrupts the protagonists to let them know he’s in their food. One of the ads, for instance, features a teenage girl who grabs a pot of melted butter and pours it over her popcorn when a phone call interrupts her. “You’re not alone,” tells her a mysterious voice, which makes her to immediately turn off. As she looks around, she sees the glass of milk in front of her. “Hi, I’m in the butter,” the glass says.

“Milk. It’s in the stuff you love” an onscreen line – which serves as the campaign tagline – reads at the end of the commercial.

The campaign, which debuted on October 22nd with highly-visible, multimedia placements across Canada, includes, besides the spots running across TV, cinemas and online, social media, web, as well as instore and outdoor display advertisements, and is set to run until December 1st.

The previous campaigns launched by the Dairy Farmers of Canada, “Honest. Canadian. Dairy” and “Dairy Farming Forward,” have also focused on millennial audiences.