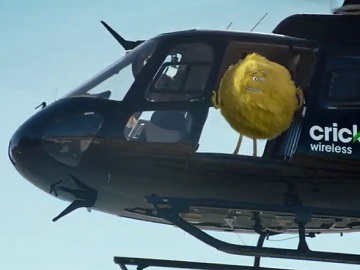 Cricket Wireless has released a new commercial, highlighting that you can get 4 lines of unlimited data for $100/month plus four free smartphones when you switch.

The 15-second spot features the company’s mascot Dusty on set, ready to give a “fearless performance” for a new Cricket Wireless commercial. Standing in a helicopter, he tells fast his line – “Get 4 lines of unlimited data for $100/month plus four free smartphones when you switch,” but hesitates when the director instructs him to jump (even though there is an inflatable mattress to land on). He asks the camera men to cut and keeps ignoring the director’s advice to jump.

The carrier has been promoting its deals in several other ads featuring the cuddly characters. Besides Dusty, the round-shaped yellow one, there is also Ramon, the round-shaped one with brown hair, Chip, the square-shaped blue one, and Rose, the tall green one. They have all co-starred in the company’s 2018 holiday commercial, created by Argonaut, San Francisco, which highlighted that “The best holiday plans are the ones that bring us together”.