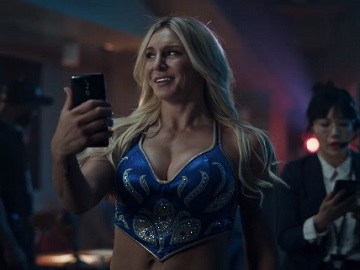 WWE Superstar Charlotte Flair meets the Queen of Cricket Coverage in the latest commercial released by Cricket Wireless. The spot opens with the company’s mascot Rose telling Flair she is going to hang her up and goes on with her declaring in a video filmed on her phone that Cricket coves 99% of Americans. She also wants to add something else, but Flair interrupts her, asking if she’s wearing her robe. Eventually, the two ladies meet face to face and the animated mascot doesn’t have the courage to confront her, so she says she was just going to give her back her robe.

Over the years, Cricket has also featured other WWE Superstars, including Sasha Banks, Dolph Ziggler, and more.

In April 2018, Cricket Wireless announced a multi-year renewal of its partnership with WWE. Partnering with WWE Superstars for in-store events and live streams has proven to be a successful strategy for the wireless service provider, which reached, in 2017, 1 million followers on Facebook and its highest social share to date, in January 2018, thanks to Sasha Banks’ livestream.