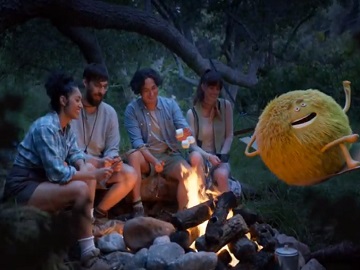 The 15-second ad features a group of friends camping and spending the evening doing marshmallows. They enjoy the wilderness and the coverage as they are on Cricket, as the network’s mascot Dusty, who’s lounging in a hammock, next to them, reveals. However, the furry character soon ends up to the ground because he gets scared by a roar.

“I’m ok,” he tells his friends, while on screen the line “Nationwide coverage” appears.

The commercial ends with the voiceover urging viewers to join over ten million customers smiling on Cricket.

Over the last five years, the carrier has been promoting its deals in multiple ads featuring the cuddly characters. Besides Dusty, the round-shaped yellow one, there is also Ramon, the round-shaped one with brown hair, Chip, the square-shaped blue one, and Rose, the tall green one. They have all co-starred in the company’s 2018 holiday commercial, created by Argonaut, San Francisco, which highlighted that “The best holiday plans are the ones that bring us together”.