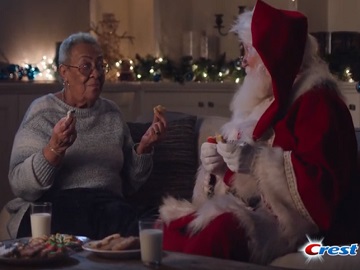 Crest granted a wish of a lifetime this holiday season, casting first-time actress, mother, and grandmother of six Bertha Nunn in one of its TV commercials.

The spot, which also celebrates the brand’s status as “the official toothpaste of Santa Claus,” features Bertha and Santa treating themselves with cookies the night before Christmas. When Santa tells her that people are usually asleep when he comes for his annual visit, Nunn playfully quips that she’s a “night owl”.

“This holiday, enjoy sweet treats with good friends. Smile, Crest has you covered,” the voiceover says at the end of the 30-second commercial.

Bertha, an 86-year-old former corrections officer and teacher’s assistant, mother of two and grandmother of six, fulfilled thus her lifelong dream of being an actress on the small screen. Moreover, the ad, which debuted during NBC’s Thanksgiving Day Parade, is set to air during her favorite show, NCIS. In a 2 minute and a half behind-the-scenes video that documents her journey to become a first-time actress, she shares her life story and talks about this dream, too.

This was possible thanks to a partnership between the toothpaste brand and Wish of a Lifetime, a nonprofit that grants wishes for seniors across the country.