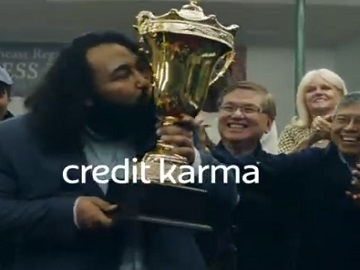 Credit Karma continues its “Here’s to Progress” series with a new installment, featuring Shawn Stockly, who wins a Regional Chess Tournament thanks to Credit Karma.

The 30-second spot opens with the voiceover informing that, on a Tuesday, in June, will feel the thrill of victory, mentioning that, “first, a few things must happen”. He then lists those things, while the video takes viewers on a journey back in time. Thus, it is found out that, after a rough year of holiday spending, Shawn had to use Credit Karma to refinance his debt and be able, thus, to cut back on his working hours and reacquaint himself with the ancient game of kings. This way, he managed to rise from novice to expert to master, “and all thanks to Credit Karma,” the voiceover also says, adding the tagline “here’s to progress”.

Other previous “Here’s to Progress” films told the story of a couple who went through some phases, as well, before getting to watch their son taking his first steps on the living room floor of their dream home, a man named Henry Harmon, who made quite the entrance at his 20th high school reunion, and Brenda Bowen and a 70-year-old man, who received a standing ovation after a karaoke performance on a Friday evening, in Vietnam.

Previous: Pepsi The Encounter with Alien and William H. Macy Commercial
Next: Key by Amazon Commercial