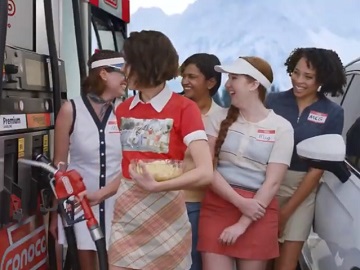 The brand of gasoline and service station Conoco continues its “Choose Go” campaign with a new installment.

The spot, from agency Carmichael Lynch, features a woman who decides to leave the house, where she gets bored, and go to Conoco to fill her tank. After that, she does what the voiceover says: throw an egg-salad party, but not just egg-salad party – a Meg egg-salad party, where she invites her four favorite Megs. While she makes egg-salad sandwiches for her guests, she hears the unmistakable slap of wet webbed feet on linoleum, then she turns to see a main gang of geese that have come for her bread. Going back outside, the party host informs her guests that the egg-salad party might be mixed. In the meantime, the local mini-golf architect, who’s out on the stroll, gets a gander and gets so inspired that he sculpts the woman and her four friends into the design of his new piece of work.

At the end of the commercial, the voiceover highlights that, instead of throwing a mixed egg-salad party, the woman and her friends could have fun playing golf, at a different party, but this could only happen if she chooses to Choose Go.

Launched in 2018, the Choose Go campaign targeted the young generation and aimed to remind them that there’s a world out there, waiting to be explored. The agency Carmichael Lynch worked with director Jimmy Marble and some of the Internet’s best and strangest animators – John McLaughlin, Julian Glander, the Bob’s Burgers crew, to create more than 50 pieces of video content, plus a series of gifs and other content.