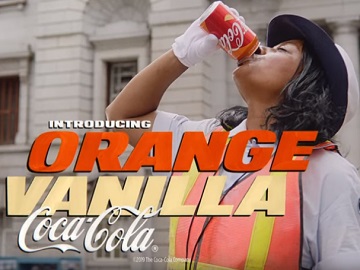 Coca-Cola advertises the new Orange Vanilla flavored coke in a series of new commercials, featuring a traffic police officer who can’t stop from drinking it.

One of the 15-second ads features the officer taking a long sip from an Orange Vanilla Coke can, while her thoughts are expressed in voiceover: “Delicious new Orange Vanilla Coke is definitely breaking ordinance 87435b of Traffico 17. But I’m gonna look the other way.” In another ad she is heard giving the new flavor the green light.

The Orange Vanilla Coke, also available as a Zero Sugar drink, marks the first new flavor in more than 10 years for the Atlanta-based company. The new products went on sale earlier this week, on February 25, across the country and are available in 12-ounce cans and 20-ounce plastic bottles. They are also available exclusively at Wendy’s restaurants in fountain dispensers through the end of the NCAA March Madness basketball tournament. They then will become available in all Coca-Cola dispensers.