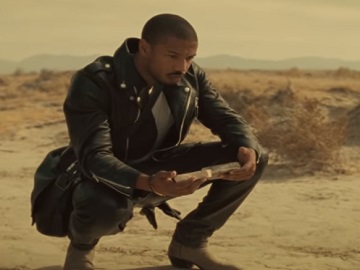 The 90-second spot, which was also written by Lee together with his children, Satchel and Jackson Lee, features the Black Panther actor riding a motorcycle on a desert road and discovering, once he gets down, rocks with negative words, such as “Hatred,” “Evil,” “Bigotry,” and “Lies”. He chooses to throw them away and place, instead, in the landscape, rocks bearing totally different words, such as “Courage,” “Truth,” “Love,” and “Dream”.

Michael B. Jordan, who has become a Coach menswear ambassador, said in a statement he is “proud of the powerful messaging of this film and to be working alongside a brand that cares about putting that narrative into the world as much as I do”.

This installment marks the first collaboration between Jordan and the Academy Award-winning director Spike Lee.

They are only two of the people who joined the #WordsMatter movement, alongside Dream Director for the Future Project Josephine Quaye, street Artist WhIsBe, Brooklyn Nets Player Spencer Dinwiddie, and more.