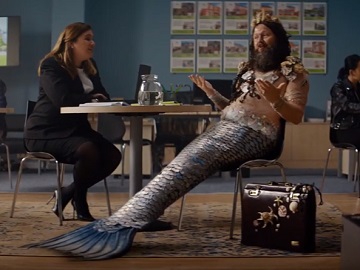 ClearScore has released a new advert, featuring a merman.

The spot, created by And Rising, is set in a coffee shop and features a woman asking a merman, who’s sitting at the same table with her, what brings him to Liverpool. After throwing a glass of water into his own face, the merman says they’re looking to raise their children on land, because there are better schools and night jobs. He also mentions he downloaded ClearScore app, which gives him his credit score and a monthly report for free, showing him his finance in a whole new way.

At the end of the advert, viewers are encouraged to join 8 million UK users and get their credit score and report for free, forever.

In 2018, ClearScore promoted its services in ads that didn’t include its longtime mascot Moose. The cute chocolate brown boxer, who’s been helping his owner, Charlie, to check his credit score and stay on top of his finances, has appeared in several ad campaigns for the London-based financial technology company since July 2016. His other catchphrases include “Okay, I come to!” and “Where going?”.