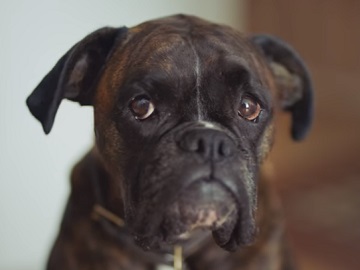 Moose is sad that his favourite time of the year has come to an end in the latest ClearScore ad.

Titled “Christmoose, over?”, the 30-second spot features Charlie thanking his sister for hosting the Christmas party, while helping her take down the Christmas decorations. When she says that now it’s time to get on with the New Year’s stuff, starting with her finances, Charlie asks her if she’s using ClearScore. Receiving a negative answer, he then explains that “ClearScore helps you manage your finances – everything from your free credit score to money coaching, and they help you find loans and credit cards tailored to you.” At this point, Moose shows up asking one of his famous catchphrases, “Wat doing?”. Charlie tells him that they’re just taking down the Christmas decorations, which makes the cute boxer realize that Christmoose is over and that they’re back to reality. “Oh, no,” he says with a sad look.

The advert concludes with the voiceover adding the company’s tagline, “Get your money sorted”.

In 2018, ClearScore promoted its services in ads that didn’t include its longtime mascot Moose. The cute
chocolate brown boxer, who’s been helping his owner, Charlie, to check his credit score and stay on top of his finances, has appeared in several ad campaigns for the London-based financial technology company since July 2016. His other catchphrases include “Okay, I come to!” and “Where going?”.