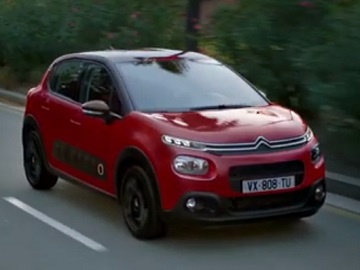 Citroën C3 is coming back to TV in an advertising campaign produced by French actor, filmmaker and comedian Eric Judor.

The 30-second commercial features a sergeant who, after spotting a grey C3 with a red roof in traffic asks his colleagues through the station if they have a visual on that particular model of car. “You mean red with a black roof, captain?” asks one of the police officers en route. Another officer informs the captain he’s got a visual on a white C3 with a red roof, which makes the captain point out that the Citroen C3 is grey. When a third officer communicates that he has a grey C3 with a red roof and red fog lights and black rims in sight, the captain, asked about the reason why he asked about that car, reveals that he loves it. “Ok, should we stop it?” the officers ask. However, the captain decides that it’s enough for them to take a picture of the vehicle.

The commercial ends with the voiceover saying “Citroën C3 with 36 customization combinations. We could have made a C3, but we chose to make 36 of them”.

The automaker informed that Judor, whose portfolio includes the series H, Platane, the film La Tour Montparnasse Infernale, will be supporting the Brand with his agency Traction (BETC Group) on other campaigns to follow in 2020.