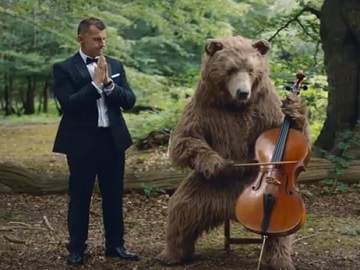 Citroen showcases the new Citroen C5 Aircross in a hilarious new advert, released with the tagline “Adventure just got civilised”.

The 30-second spot features Nigel Owens MBE (Welsh International Rugby Union referee) as he showcases his ability to civilise even the most unruly of beasts both on and off the pitch, when meeting a bear on a forest road. Faced with the wild animal, Owens stops his Citroen C5 Aircross and invites him to have a chat. He then begins with a “haircut,” teaches him to be a gentleman and grab only one piece of meat from a silver tray, and how to play double bass.

At the end of the advert, which sees the bear sitting in the passenger’s front seat, near Owens, the voiceover says the tagline “Adventure just got civilised”.