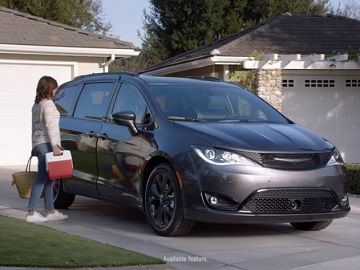 Chrysler has released a new ad for the 2019 Chrysler Pacifica, focusing on the Stow ‘n Vac feature.

The minivan is featured again like a talking character. This time, it approaches a neighbor who’s loading the trunk and gets ready to go on a trip with his family. “Takin’ it off road station wagon, eh?” the Pacifica asks the man, who replies “You know it’s an SUV”. The minivan keeps teasing him by suggesting that his family is “duckin’ and rollin’,” while the members of the family that owns it are “stowin’ and goin'”. “But that’s cool, I know for a fact that your SUV does not suck,” the Pacifica adds, bragging about its vacuum, the Stow ‘n Vac powered by RIDGID, the most powerful vacuum in the segment, extends throughout the entire cabin.

This is not the first time the automaker promotes the Pacifica’s Stow ‘n Vac feature. One of the brand’s previous spots featured actress Kathryn Hahn eating brownies in the back seat of her Pacifica, while children are screaming inside the house. At the end, she removes the proof of what she has been doing. vacuuming then the crumbles fallen on the car floor.

“Until we leave the bake sale and all the brownies are gone,” she also says, after “You saw nothing!” she shouts to the camera, as she closes the door.

The Chrysler Pacifica is the only minivan in its class with the Stow ‘n Go Seating and Storage System, according to the automaker, which states that by simply folding your third-row seats into the floor you will make plenty of space for all your fun. Other available features include the Class-Exclusive Easy Tilt Seating, which lets passengers access the third row with the simple lift of a lever. The available Stow ‘n Vac powered by RIDGID, the most powerful vacuum in the segment, extends throughout the entire cabin.

Kathryn Hahn stars in several other comedic videos for Chrysler Pacifica, that showcase various features available on the minivan, which is “America’s first-ever and only hybrid minivan”.

Previous: Progressive Babyman at the Office & in Restaurant, at Date Commercial
Next: Realtor Alpaca Whisperer Commercial