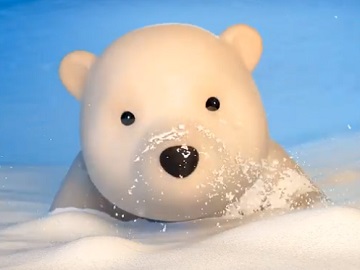 Chopard has released its Christmas commercial, wishing people the happiest of holidays.

The 2-minute film follows Arty, a little 3D white bear, as he makes his way through a forest following his guiding star. He runs, he slides, he jumps around and, along the way, he sees several jewelries, including earrings, necklaces, bracelets, ring, and timepieces that light his path. Eventually, he arrives at a huge Christmas tree lit up and joins his friends.

The commercial ends with a panoramic view of the forest, which features the brand’s logo.

Chopard’s window display animation for this holiday season, created by Paris-based agency Manymany, which specialises in scenography and visual marketing and produces creative, custom-made designs worldwide for the most famous brand, is inspired by Arty’s tale: three giant hardcover open paper art books suggest Arty’s story that is written on the right-hand side page of each book as three different chapters.

The brand invites you to discover several collections and pieces this holiday season, including the Ice Cube Collection, the Happy Snowflakes timepiece, the 50-piece limited series L.U.C Flying T Twin timepiece for men (worn by Ryan Reynolds’ character “One” in the Netflix film 6 Underground (available exclusively on the streaming service as of 13 December), and more.