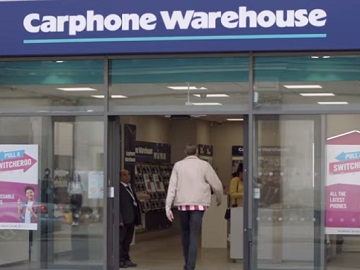 Carphone Warehouse has enlisted Peter Crouch for its latest ad campaign, that encourages mobile phone users to make a “Switcheroo”.

The Burnley forward is presented as a “serial switcher” in a 30-second ad created by agency AMV BBDO, that sees him signing a contract with Carphone Warehouse. “I thought I knew a thing or two about switching contracts. I played for so many clubs I sometimes forget which town I’m in,” Crouch says in voiceover, whilst on screen he is seen walking down the sidewalk and helping out, on his way, a guy who’s placing letters on a billboard. “I thought I was an expert at switching, but I was wrong,” he also says as he enters a Carphone Warehouse store, referring then to them as the real experts at switching. Crouch approaches a sales rep and asks confirmation about the easy process of switching networks and his possibility to save money on his current contract. When he pulls out a pen, willing to know where he has to sign, his agent calls him. Enthusiastic, Crouch gives him the news about him signing a new contract, which makes the agent go crazy.

The Premier League striker then specifies he was talking about another type of contract.

The phone retailer’s “Switcheroo” campaign is set to run across TV, social media and in stores. The ad, directed by Andy Mcleod of Rattling Stick, debuted on 9 June, during the Uefa Nations League Final.