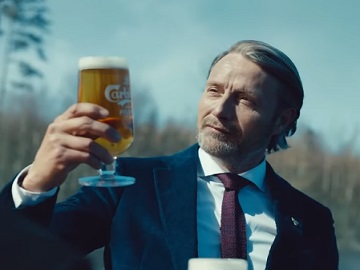 Carlsberg advertises its New Carlsberg Danish Pilsner, rebrewed from head to hop, in a new spot that runs in the UK.

The video, entitled “The Lake,” stars Mads Mikkelsen rowing across a lake. “Probably the best beer in the world.

Once true. but in the UK Carlsberg pursued being the biggest, not the best. And the beer suffered. But we, Danes, don’t cry into our beer. We focus on brewing a better one,” the actor says while paddling across a lake. As he gets on the dock, where a man is waiting for him holding a tray with two glasses of Carlsberg Danish Pilsner, he grabs a glass and asks if the person responsible for the old beer has been dealt with. At this point, the camera pans back to the lake, where some bubbles nod to someone going underwater. “Probably,” Mikkelsen adds looking at the camera.

The advert, available as different versions, is set to air throughout the summer on TV and digital channels.