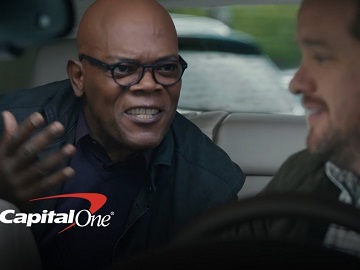 Capital One advertises its Quicksilver Card, which lets you earn unlimited 1.5% cash back on every purchase, everywhere, in a new commercial starring Samuel L. Jackson.

The 30-second ad features the award-winning actor in the backseat of a car that it turns out to belong to a man named Gary. “Gary, Gary, Gary, I am proud of you, my man. Making simple, smart cash back choices… With Quicksilver Card from Capital One you’re earning unlimited 1.5% cash back on every purchase, everywhere, like that new laptop,” Jackson tells Gary as soon as the latter gets in the car, pointing to the laptop Gary has just bought.

“Quicksilver keeps things simple, Gary. And smart, like you. And I like that,” he also adds, getting out of the car. When Gary says to himself “I guess I am pretty smart,” Jackson shows up at the passenger’s front window, asking Gary to not let that go to his head.

Finally, he stands up and asks, looking at the camera, “What’s in your wallet?” – which is the bank’s tagline.

Another celebrity tapped by Capital One to promote its products is Jennifer Garner. The actress, who became a Capital One spokesperson in 2014, pitches the company’s Venture card, which allows users to earn unlimited double miles on every purchase. She appeared in several spots over the years, all set in different places, from an airplane, to a mall, talking about the Venture Card and its benefits. In 2016, she starred in a commercial with her father William “Bill” Garner, in honor of “Bring Your Father to Work Day”.