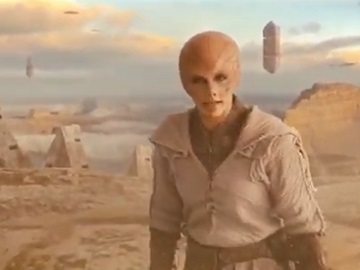 The 30-second ad features various Capital One customers in different situations, being asked about some of their recent financial actions. A father who’s taking a photo of his family is “asked” if he spent $530 at Photo Center, a young woman watching a movie at the cinema is asked by one of the movie characters if she made two identical purchases of $104 at Cut&Cloth, and a woman traveling with her friend is asked – through a billboard on the highway – if she left a 124% tip at Bistro 55.

“Capital One knows life doesn’t update you about your credit card. So meet Eno, the Capital One Assistant that catches things that might look wrong and helps you fix them,” the voiceover says at the end of the commercial, adding that this is “Another way Capital One is watching out for your money when you’re not,” as well as the company’s tagline, “What’s in your wallet?”.

According to Capital One, Eno automatically sends useful insights and alerts about your credit card accounts.

Capital One customers can thus catch potential mistakes like a duplicate charge, receive insights like if a recurring monthly bill is higher than usual, and stop potential fraud with Eno’s 24/7 alerts. Eno comes with most of the bank’s credit cards.