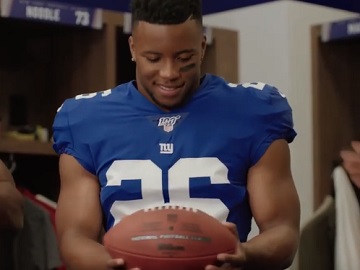 The spot, part of the brand’s “Champions of Chunky” campaign, features the New York Giants running back in the locker room alongside teammates as he’s about to receive the game ball from head coach Pat Shurmur. However, his mother shows up holding a plate and says that Saquon doesn’t need another football, but a bowl of Campbells Chunky. “What? The game soup? Thanks, mom,” Barkley says before grabbing a mouthful of the “game soup,” which is “packed with hearty meat and veggies”.

At the end of the commercial, the tagline “Soup that eats like a meal” is flashing across the screen.

“We’re super excited about the ‘Champions of Chunky’ campaign. It’s really what it is a modern riff on our iconic Mama’s Boy campaign, which really celebrates the champions in our life and how they support you every day,” Gary Mazur, Brand Marketing Director, said in a press statement.