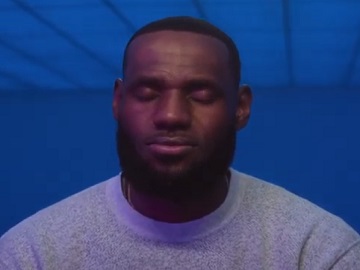 LeBron James credits meditation, sleep, and a healthy mindset as the keys to his extraordinary achievements and personal happiness in the latest commercial for the mental fitness app Calm.

“We’ve always thought of great athletes as the strongest. The fittest. Chiseled to perfection. What’s a strong body without a sound mind? We’re so focused on strenght that we forget to strengthen our focus. The mind is like a muscle. The more you train it, the stronger it becomes. And while the greats master the body, the greatest master the mind,” the Los Angeles Lakers superstar says on the 30-second spot.

Calm, which was named iPhone app of the year in 2017, and James announced their partnership earlier this month, on December 9, at an event held at the “h club LA”. Calm’s co-founders took the opportunity to herald also the launch of a worldwide marketing campaign. The athlete, who is going to create content for the app as part of the agreement, revealed that he learned about the paid-subscription app from his wife, about a year ago, and that, since then, he has used it every time he’s gone to sleep at night or taken a nap during the day.