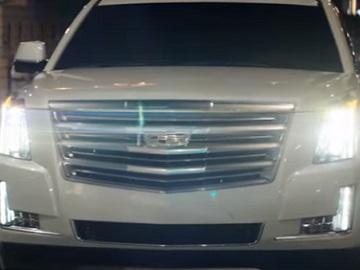 Cadillac showcases, in one of its latest ads, part of the brand’s new “Rise Above” campaign, the 2019 Cadillac Escalade.

Titled “Take the Stage,” the 30-second spot features an artist as he drives the 2019 Escalade full-size SUV down the city streets at night, gets ready in the backstage and goes on stage, in front of an audience. “Every stage needs a star. Every road needs a ruler. Rise above with the Escalade and the uncompromising Cadillac SUVs,” the voiceover says, while in the background the 2016 single “Me and Your Mama” by American rapper and singer Childish Gambino, from his third studio album “Awaken, My Love!,” is playing.

On Sunday (February 24), the automaker will air, during the Oscars telecast, a 60-second commercial, also scored by Gambino’s “Me and Your Mama,” that showcases its 2019 line-up of crossovers and SUVs. In addition, there are other two ads, each focusing on the XT5 midsize crossover and the XT4 compact crossover.

Throughout Sunday and during the Oscars telecast, several artists and Oscar nominees will share, as part of the brand’s “Rise Above” campaign, created in partnership with Rokkan, their stories about how they overcome obstacles and pursued their dreams. Guests to the awards show and other Oscar events will have at disposal a fleet of Cadillac CT6 sedans and Escalades.