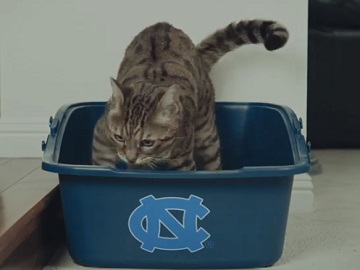 The basketball-focused campaign, which marks the first work from The Martin Agency for the chain, since it was appointed as Buffalo Wild Wings’ lead creative agency in November 2018, condemns watching the basketball tournament under sub-par conditions, such as a on a tablet, on a phone with poor service or in your basement, and emphasizes the unrivaled experience of watching the tournament across hundreds of TVs with wings, beer and your best friends by your side.

One of the spots features a fan watching a game alone, in front of his TV, and the voiceover asking what happened to him and his man cave, where his cat, Mr. Pickles is using the box and makes strange noises. The voiceover then urges him to get out of his cave and go to Buffalo Wild Wings, order bears and crush all the wings because “that’s sports now”.

Buffalo Wild Wings, an official partner of the NCAA, has also unveiled a cheeky, in-restaurant promotion for March Madness in “response to the spike in vasectomy procedures during the NCAA tournament, where thousands of men coordinate their doctor-ordered R&R to coincide with the biggest sports weekend of the year.” In addition, the chain has also created a custom-built barstool called Jewel Stool, featuring a built-in cooling apparatus to provide numbing relief, as well as a chilled cup holder and “beer me” light. This will be available on a first-come, first-served basis at Buffalo Wings’ New York City Times Square and Koreatown (LA) locations.