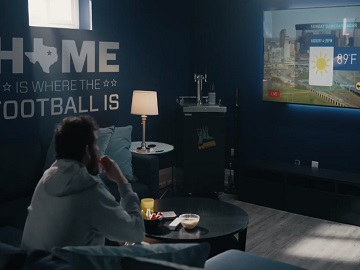 Buffalo Wild Wings has released a new ad to remind people that it’s the football season.

“Your man cave is a lie. It’s not a masculine refuge. It’s a basement in your wife’s house. Games don’t have frilly craft store signs, yell about it in your man cave no one can hear you scream,” the voiceover says on the 30-second commercial, urging then viewers to wake up, head upstairs and go to Buffalo Wild Wings, where the wall color is TVs and the wings taste like freedom. “Also, your friends actually like coming here,” the voiceover adds toward the end of the video, which sees a group of friends hanging out, watching the game and having fun in a Buffalo Wild Wings bar.

This is not the first spot in which the voiceover urges men to get out of their man caves. In a spot released for the March Madness, the voiceover advises the man sitting in his man cave to get out of his man cave, where his cat is using the box and makes strange noises, and go to Buffalo Wild Wings instead, to order beers and crush all the wings.

The restaurant chain’s basketball-focused campaign for March Madness, launched in partnership with The Martin Agency, also included, besides a number of spots, on-site stools specifically designed for guys who just got vasectomies. Called “Jewel Stools,” they featured a built-in cooling apparatus to provide numbing relief, as well as a chilled cup holder and “beer me” light.