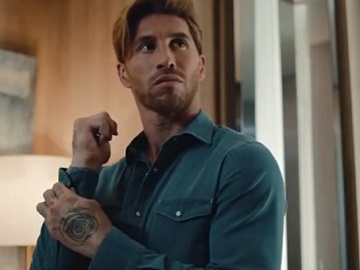 Budweiser has teamed up with Sergio Ramos for its new limited edition tattoo-centered “Be A King” campaign.

Spain captain and World Cup winner, who was announced the beer brand’s ambassador ahead of the Spaniards latest milestone in which he will become his country’s most capped player ever, stars in a 60-second commercial aimed at celebrating his journey as a king of global football.

“Here he comes. The youngest player in 64 years to take to the pitch for Spain,” the voiceover says in the opening of the 60-second spot, which sees Ramos shirtless, with no tattoos, putting a limited-edition bottle of Budweiser on the table and getting dressed. As the voiceover continues to talk about Ramos, introducing him as “The boy from Seville” and praising his football-related skills, the player’s back begins to become covered in tattoos – his iconic tattoos, from the heart on the back of his neck to the lion, to the crown, the 92 and 48 (the minute and seconds he scored during the UCL final in 2014), and more.

“It’s in all of us to Taste Greatness” an onscreen line reads at the end of the video, which features Ramos with his shirt on, grabbing again his Budweiser bottle and leaving the house.

Budweiser will produce limited-edition bottles featuring exact replicas of Ramos’ most iconic tattoos, which will be available in several countries, and will also allow fans to learn the meaning of those tattoos from Ramos himself through exclusive content created as part of the campaign.

Ramos is expected to receive his 168th national team cap on Saturday when Spain take on Norway in a qualification match for Euro 2020.