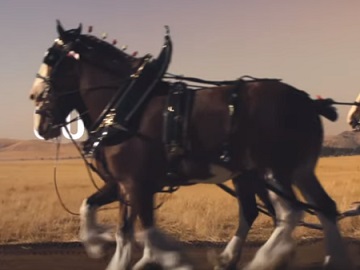 Budweiser is among the companies that will run commercials during this year’s Super Bowl and it has recently released a teaser, raising the question “Guess who’s back?”.

The 10-second spot features the iconic Budweiser Clydesdales trotting across a sweeping country plane and concludes with the onscreen line “Super Bowl LIII” flashes across the screen.

Last year, the brand’s Super Bowl commercial featured actual employees of Anheuser-Busch, from the brewery in Cartersville, Ga., more precisely, where they make beer, but where they also produce water under the company’s emergency water program. According to Budweiser, over the past 30 years, the Cartersville site has helped to provide more than 79 million cans of clean drinking water to cities effected by natural disasters.