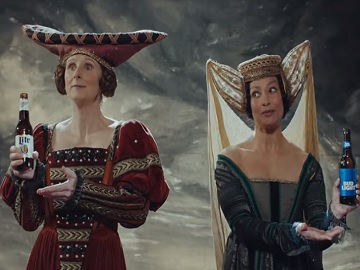 The spot, set in a medieval theatre, shows the two thespians on the stage, listing the differing beer ingredients between MillerLite and Bud Light. Thus, while the first lady mentions barley, water, hop extract and corn syrup as the ingredients of the MillerLite beer, the second proudly announces that Bud Light is made with barley, rice, water, hops, and no corn syrup, which makes the audience give a round of applause.

This is only the latest ad in the brand’s “controversy” campaign, launched during this year’s Super Bowl.

Previous ads featured two medieval barbers talking beer ingredients while giving bowl cuts, two warriors in a trojan horse discussing about the ingredients in their beers (Miller Lite, which is brewed with hop-extracted corn syrup and Bud Light, which is not) and a troop from the Bud Light kingdom that embarks on a journey to deliver a shipment of corn syrup to its rightful owner.